14 I do not write these things to make you ashamed, but to admonish you as my beloved children. 15 For though you have countless guides in Christ, you do not have many fathers. For I became your father in Christ Jesus through the gospel. 16 I urge you, then, be imitators of me. 17 That is why I sent you Timothy, my beloved and faithful child in the Lord, to remind you of my ways in Christ, as I teach them everywhere in every church.

18 Some are arrogant, as though I were not coming to you. 19 But I will come to you soon, if the Lord wills, and I will find out not the talk of these arrogant people but their power. 20 For the kingdom of God does not consist in talk but in power. 21 What do you wish? Shall I come to you with a rod, or with love in a spirit of gentleness?

• These verses provide a conclusion to the argument Paul has made
• Everything, to and including Paul, is to be judged by the Gospel of Christ
• This truth is the foundation for all the Churches
• The Corinthians have a choice continue in their own way and experience the rod of discipline, or follow the Gospel and experience gentleness

•Talk or Power?
– One of these is the desire for power
– Early on in human history it was through eating the forbidden fruit (Genesis 3)
– Later it was from pagan beliefs (Genesis 6 etc.)
– This pursuit of power through spiritual forces has continued both in the darkness and the light
– We would be mistaken if we only sought power spiritually
– We can consider military power
– The one with the bigger army has the power
– Likewise economic power
– We can think of the Rockefellers, Rothchilds, Soros, Gates etc.
– Political power is seen as legislation is made, and remade, and changed
– This kind of power can cause things to occur as well

•Talk or Power? (2)
– There is also power that can come from ideas
– Everything from Communism to Capitalism to every other “ism” in between
– There is a belief accepting them will lead to bigger and better things
– This world offers power in many ways
– They claim to offer the same thing…salvation
– By sacrificing to demons, seeking military might, wealth, trusting politicians, giving ourselves to an ideology
– Do they provide us salvation?
– Are they able to give us purpose, meaning, and value?
– Can they accomplish the goal they set out to do?

•Talk or Power? (3)
– No. Instead they end up being nothing more than talk
– In the end they are incapable of providing us the power to save
– When my grandfather passed the family wondered who would inherit some of his books
– They were works of Plato, Homer, Shakespeare, Bacon etc.
– Recently I picked up one of the books
– It has Meditations by Marcus Aurelius
– He was a Roman emperor who was heavily influenced by the Stoics
– While I have been reading it I can help but see things in his meditations and say, “I can agree with that statement.”
“Begin the morning by saying to yourself, I shall meet with the busybody, the ungrateful, arrogant, deceitful, envious, unsocial. All these things happen to them by reason of their ignorance of what is good and evil. But I who have seen the nature of the good that it is beautiful, and the bad that is ugly, and the nature of him who does wrong, that it is akin to mine, not only of the same blood or seed, but that it participates in the same intelligence and the same portion of divinity, I can neither be harmed by any of them for no one can fix on me what is ugly, nor can I be angry with my brother, nor hate him. For we are made for cooperation, like feet, like hands, like eyelids, like the rows of the upper and lower teeth. To at against one another thus is contrary to nature; and it is acting against one another to be vexed and turned away.”

•Talk or Power? (4)
– How similar that is to what Paul has stated about the different Apostles
– How together the roles are like a tapestry
– Does Aurelius have wisdom? I think so
– Does he have power?
– “All that is from the gods is full of providence.” –Marcus Aurelius
– His paganism in the end must shine through because it is the foundation for his beliefs
– Paul would recognize Aurelius has talk but no power
– His foundation is cracked and broken
– Despite the wisdom that Aurelius had, and despite the truths that he may have come to, in the end there is no power of salvation because the center cannot hold

•Talk or Power? (5)
– Contrast this with the message Paul has been saying
– “Do not break the foundation!”
– He has been showing us that the true source, the true foundation, for this life is found in the Gospel of Jesus
– “16 For I am not ashamed of the gospel, for it is the power of God for salvation to everyone who believes, to the Jew first and also to the Greek. 17 For in it the righteousness of God is revealed from faith for faith, as it is written, “The righteous shall live by faith.” –The Apostle Paul (Romans 1:16-17, ESV)
– We are desperate for what is powerful
– Only in Christ is the wisdom of God revealed to us
– In the right context Aurelius is right, but without that context, without God, without Christ, it ends up meaning nothing

•Talk or Power? (6)
– It is so unfortunate today to not realize just how powerful we really are
– The Spirit is powerful
– He does miraculous things in our midst
– Yet that is not all the power of God
– We have been given the power of the Spirit of truth
– We are a powerful people not because we are so strong…we are weak, God is strong!
– The Gospel is powerful because it accomplishes what it sets out to do
– We are powerful because we belong to the Message we proclaim which is power itself
– The moment we let go of the Message of the cross
– It is then we lose all power
– Whenever we cheapen the grace, when we justify the wicked, when we say Christ only a way instead of the way, we trade in power for talk

•Talk or Power? (7)
– Why do we do such a thing?
– We always think of powerful as winning not realizing true power wins even when it appears to be losing
– True power stands firm in the truth regardless of the consequences
– True power is being able to say to the world, “I know you want me to compromise on this issue, but here I stand I can do no other.”
– We have allowed ourselves to be corrupted by the world
– For…peace? Security? Fear?
– Meanwhile the Apostles are standing as examples to us
– Don’t let the world…blind you to the truth
– The moment you stop speaking, the moment we allow fear to win, that is the moment when the power of the world overwhelms

•Talk or Power? (8)
– So much of what we see with our modern faith…is utterly powerless
– They have syncretized their beliefs with powers of evil and in doing so have lost true power
– The more we look like the world the less power we have
– We can point to everyone else and say they all have talk but no power
– Let’s make sure we are being consistent with what has been handed down to us
– We have a long history in the Church
– Let’s remember the shoulders we stand on, they were giants and strong because they trusted God more than the world

•Talk or Power? (9)
– Let’s stop playing games
– Let’s simply proclaim what is power itself and live in that power faithfully
– If Christ is our foundation, then He must be the foundation for all of our lives
– To be obeyed every day as Lord and Savior and our Wisdom, God’s Wisdom
– What will it be, Church?
– Will we be the people of talk, or the people of power?
– My hope is that we would choose power and that we would obey God even though it can inconvenience us
– To remember those who came before us to stand firm in love, kindness, but most importantly, the truth of Christ 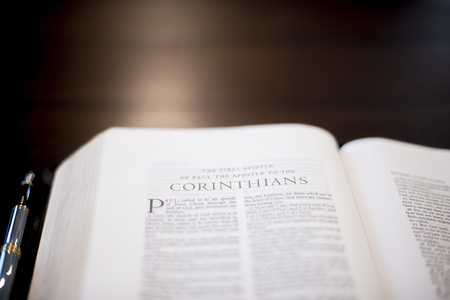 Paul concludes his opening argument by pointing, again, back to Christ as our understanding and how this leads to transformation.
I Corinthians
I Corinthians 4:14-21