(Unfortunately we were unable to record video for this weeks sermon, the audio, however, is available!)

and his Redeemer, the LORD of hosts:

“I am the first and I am the last;

besides me there is no god.

Let him declare and set it before me,

since I appointed an ancient people.

Let them declare what is to come, and what will happen.

have I not told you from of old and declared it?

And you are my witnesses!

Is there a God besides me?

There is no Rock; I know not any.”

12 The ironsmith takes a cutting tool and works it over the coals. He fashions it with hammers and works it with his strong arm. He becomes hungry, and his strength fails; he drinks no water and is faint. 13 The carpenter stretches a line; he marks it out with a pencil. He shapes it with planes and marks it with a compass. He shapes it into the figure of a man, with the beauty of a man, to dwell in a house. 14 He cuts down cedars, or he chooses a cypress tree or an oak and lets it grow strong among the trees of the forest. He plants a cedar and the rain nourishes it. 15 Then it becomes fuel for a man. He takes a part of it and warms himself; he kindles a fire and bakes bread. Also he makes a god and worships it; he makes it an idol and falls down before it. 16 Half of it he burns in the fire. Over the half he eats meat; he roasts it and is satisfied. Also he warms himself and says, “Aha, I am warm, I have seen the fire!” 17 And the rest of it he makes into a god, his idol, and falls down to it and worships it. He prays to it and says, “Deliver me, for you are my god!”

18 They know not, nor do they discern, for he has shut their eyes, so that they cannot see, and their hearts, so that they cannot understand. 19 No one considers, nor is there knowledge or discernment to say, “Half of it I burned in the fire; I also baked bread on its coals; I roasted meat and have eaten. And shall I make the rest of it an abomination? Shall I fall down before a block of wood?” 20 He feeds on ashes; a deluded heart has led him astray, and he cannot deliver himself or say, “Is there not a lie in my right hand?”

and Israel, for you are my servant;

I formed you; you are my servant;

O Israel, you will not be forgotten by me.

22  I have blotted out your transgressions like a cloud

return to me, for I have redeemed you.

• These verses challenge the pagan nations of the day
• Isaiah shows how idolatry makes little sense since the idols are created by humans
• They bow down to these created things
• Isaiah calls blindness for what it is, and encourages the people toward God
• Their God can redeem

•The Great Conflict
– Since the beginning of chapter 42 Isaiah has presented us with two worldviews
– The pagan with pagan deities and their idols
– The alternative with One Creator and Sustainer
– These are radically different from one another
– Either one is right, one is false, or they are both false
– An argument is presented before us
– They show…how the idolaters worship what has been created by their own hands
– They believed they will be saved by what they have made

•The Great Conflict (2)
– This is the way of the pagan worldview
– This is the way of human reason alone
– It can be an understanding of the world we have made ourselves
– It can be humanism…naturalism…some other spirituality
– They are ways of understanding the world and ways of interpretating our experiences in the world
– For the Christian today there is as much danger of being influenced by worldviews as was the case for the Jewish people of old
– We are tempted to understand the world through principles no less pagan
– Are the worldviews of our own day, able to answer the same questions posed by God?
– So far the best answers we get lead to skepticism, apathy, or general delusion

•The Great Conflict (3)
– When it comes to the great questions of morality the naturalist and humanist has no real answer
– Some who are honest come tot eh conclusion morality is subjective/based on culture
– If this is the case then they cannot say certain cultural practices are wrong
– Morality is subjective, so who is to say one understanding of morality is better or more right or truer than another?
– Others argue objective morality does exist
– There is nothing which would dictate these things are wrong or evil
– They try to argue for something which their own worldview cannot answer, and in doing so fails to adequately give a reason to why or how such things are so

•The Great Conflict (4)
– This is further true of postmodernism in general
– One concept of postmodernism is that we cannot know truth
– Humanity is finite and being finite we cannot know with 100% certainty
– Yet, the postmodernism fails to grasp the ramifications
– If I were to tell a postmodernist that rat poison is really Tylenol they will not say, “Well we can’t know for sure!”
– We take for granted that we accurately understand the world around us
– Unfortunately postmodernism has made strong headways within the Church
– It is here where challenges to the historic Christian faith is making strong headway
– Things such as Biblical inspiration, the truth of the Scriptures, salvation by grace through faith in Christ alone, and there being only One God are all under assault

•The Great Conflict (5)
– The question we must ask ourselves is whether or not we will follow the cultural trends
– Or will we stand on the historic Christian faith
– The authority of the Scriptures, the reality that Christ is the only way of salvation for a fallen race, and that there is only One God who has revealed Himself through the person of Jesus Christ according to the Scriptures?
– Will we be bold enough to stand firm on the truth and knowledge given to us, or instead, will we fall sway, bend the knee, to the cultural claims
– I believe we must acknowledge that the prophet Isaiah, were willing to wage war against delusions
– They were willing to say they had knowledge and truth about the world which were given to them by God
– It’s source is the giver of all wisdom and knowledge which is God Himself

•The Great Conflict (6)
– We have been entrusted with truth and knowledge, the grand reality of God Himself as declared in the Scriptures
– God exists, He has created humanity, and though humanity has fallen into sin, we can be redeemed through His Son Jesus Christ
– We are in an age of delusion
– It is not any less of a delusion than idolatry or paganism
– Salvation from the delusion is here
– By turning toward Christ, turning toward the salvation which God provides, we can begin to experience reality in a grand way
– Carissa and I had friends over, one was not a Christian
– We discussed our experience with God and our unbelieving friend started crying
– Carissa asked, “Why are you crying?”

•The Great Conflict (7)
– A few years later our other friend who was there got married and our unbelieving friend was at the wedding
– She acknowledged the feel of something other
– Upon being pressed she acknowledged it was the feeling of true love
– She ran from it and continues to do so today
– She would rather live with her delusion than the truth
– As we consider our culture and society we can, I am sure, see other examples which are similar
– We need to check our beliefs to make sure they conform to the reality rather than trying to make reality conform to our beliefs
– We worship the God who created all reality, and created us to experience and consider the reality He has made
– Paganism is still around us
– Let us not be duped nor tricked
– There is a conflict within humanity to acknowledge the Living God or to be our own gods
– The conflict is around us, and within us, and it is a great conflict 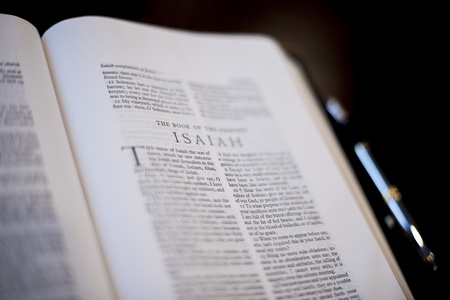 Isaiah gives the reason for the failure of their society.
Isaiah
Isaiah 59:1-15

Isaiah reminds us the purpose of religion.
Isaiah
Isaiah 58

Isaiah continues to show the difference between those who do and do not repent of their sins.
Isaiah
Isaiah 57:14-21

Isaiah warns of the results of poor leadership, and how it leads to unrighteousness in society.
Isaiah
Isaiah 56:9-57:13

The effects of this redemption are not limited to any particular people, but all are welcome to it.
Isaiah
Isaiah 56:1-8